I learned that meritocracy was rigged early on but it took me years to understand that it was only selectively so. “you have to jump twice as high…” is either told to you kindly as fair warning or thrust upon you suddenly while you’re trying to learn how to jump.

In grade 2 or 3 (I changed schools here so let’s keep it vague) I met a girl named Hilary* who changed my life forever (this is not a Freindship Love Letter). While she was in fact my friend I like to think of her as one of my earliest and most formative teachers. Not only did she teach me about wealth (did you know that not only are there different types of Barbies, she had a freaking House?!). She taught me that Woolworths sold food (imagine!), that houses in real life could take up entire blocks that involve tennis courts and swimming pools (plural) and that this said Woolworths “food section” made edible Teletubby paraphernalia (The teletubbies ranked as highly as the Power Rangers at this point in our lives) including the “Tubby toast” as seen on TV that put my lunchbox to shame. I tell you, when this girl presented me with an advent calendar of chocolates before Christmas, not only was I afraid to eat the chocolates, it took me weeks to figure out it what it was. I knew people were different and that not all money was equal but wealth was a revelation. 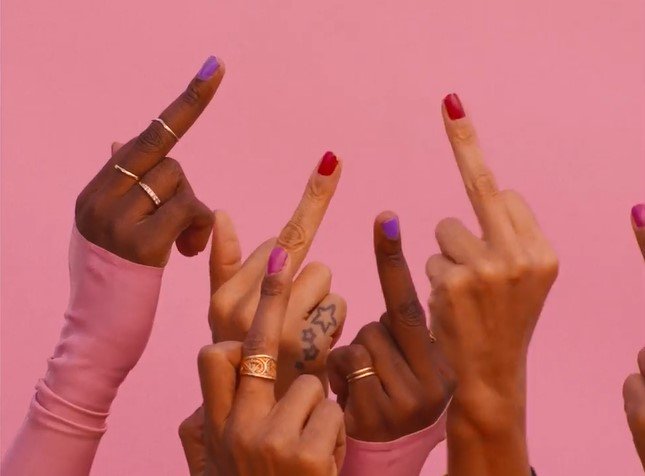 But here’s the real lesson Hilary taught me: my being smart (which I knew) wasn’t going to be enough to get me through school and wealth (in all its forms and subsidiaries) could be a convincing substitute. We once had a project about vegetables. I believe the brief said 1 page, pick a vegetable and talk about it on Monday. As with all my projects, I got home, told my mom I had a project, she asked what I needed and left me to it. She bought the YOU magazine that week because overachiever that I am, I’d decided that I wanted to make a visual aid to go with my presentation. I stuck 2 of the fancy clean printer papers together and made “2 pages” (I’d later learn the nomenclature was A3) stuck with pictures of vegetables from the trusty YOU magazine and a very carefully ruler-wrought title in my own hand. As you can imagine, I was feeling good, maybe a little guilty for going beyond the call of duty and not giving the other kids a fair chance. I kid you not, I was debating leaving the visual aid on my desk right up until the moment I saw the most educational thing I’d ever seen in my life: Hilary was holding a giant cardboard the size of a class poster (I thought only teachers had access to such) and the title was in 3-dimensional letters (I’d later learn was crafts) with typed words and printed pictures. Not having a computer, I was shaken. The kicker was, walking behind her, dragging a cart of fresh real life assorted vegetables, was her mother. If ever I’ve balked kids, it was that day. I realised that there were no rules, that parents did (and could!) help and that there were no consequences for this. The sportsmanship that was drilled into us in the various fields I was busy being mediocre on (tennis, netball, hockey etc) did not apply here. And if my mark was going to be anywhere near what I deserved, I’d need to give the presentation of my life. Needless to say we both got 9/10 and I maintain that my YoTV career could’ve been launched that day had there been cameras rolling.

Fast forward a few years and I’ve lived through enough projects to know that integrity will always cost me, forever. Yes, I could enlist my stepfather (who was literally an artisan)’s help in my light socket electricity assignment but I’d have to determine the cheating line for myself. On the flip side, if my projects were too good: I’d be questioned about parental involvement. And I’d have to answer the question of whether access to infinite resources =/= cheating because nothing was being done to level the playing field and no one else was asking. I learned to loathe handmade projects were my brain could only do so much and to love the teachers that imposed a monetary limit on projects or explicitly outlawed parental interference. I remember them by name to this day. Because the vegetable incident repeated itself repeatedly in new and unexpected ways throughout my school career, and while other children were simply learning to jump we were also having to figure how to jump higher. But it’s just a few silly school projects right?

By University I’d heard and internalised enough lies that I was starting to come to the devastating conclusion that perhaps white people were superior in intellect to black people. I mean, we’d all been in school together since grade 1, we all had “access” to the “same” education and here we all were at the same university sitting in the same lectures. I was forgetting Hilary. I was forgetting that I’d never heard of past papers until I was 17 years old and about to take prelims (I overheard some classmates talking about them), that I’d never considered tutoring as an option available to me (who was not in any academic trouble) because somehow, despite the fact that my mother was making exorbitant funds available to get me access to the best education there was an additional cost. I never learned to play the piano (which I love) because it wasn’t as easy as sitting in front of a piano with a willing mind, you had to pay (a lot). Mind you, I wasn’t feeling particularly short-changed I had an excellent education and record and I didn’t realise the cumulative benefits of these things until I read article after article about the factors that influence education when I was (wait for it) already in university (honorable mentions: your parents level of education, home language being “the language of learning”, social capital, food security and playing a musical instrument particularly the string instruments and piano). It was during the debate around the University Admissions Policy and why it was “unfair”.

I looked around and saw only outcomes and they were damning: the top 10th percentile looked a certain way (read: colour) and the bottom 10th looked another way. Remember: we were all playing on level ground so only one logical conclusion could be drawn. Right? Meritocracy had gotten us this far but not a step further it would appear. And then I entered my clinical years:

A word on medical school: The early years are heavily theory-based and the latter years are more clinical and practical with an emphasis on integration. You’re being taught by clinicians, interacting with patients and being assessed in pseudo-clinical environments/scenarios (quite subjectively). That is to say, if the person across the table from you in your exams (or supervising you in the ward) holds some (conscious or unconscious) ideas about you and yours, that absolutely will reflect in your marks. And a lot of people were drawing my own (incorrect) conclusions about myself and my melanated-fellows. That is until the unlikely duo of Steve Biko and Malcolm Gladwell saved my life (and mind). Black consciousness [1] was dogma-made-reason that had never crossed my mind, academically speaking. Biko makes the case for Blackness in a way I’d never come across before and it became evident to me that the omission of his work from our formal education was not an oversight but a decisive action. It is a radical thing to teach Black people to love themselves, more so their blackness therefore compelling them to stop chasing assimilation and meritocracy; things that only work according to our ability to parrot whiteness (the goal of whiteness itself being unattainable as we would all learn one way or another). In the book Outliers [2] (chapter: The Ethnic Theory of Plane Crashes), Malcolm Gladwell unpacks what he calls the Power Distance Index (PDI) that exposed the last lie about my people. In the opening paragraphs, Gladwell finds an unsettling correlation between the incidence of plane crashes and the race/ethnicity of the pilot. If you’ve been paying attention it feeds the lie: blackness (and melanin in general) is inferior and associated with poorer outcomes. Then he flips throes some nuance in there. The PDI is, essentially: cultural deference to authority and how much weight authority (and by proxy seniority) carries both socially and culturally. Caucasians, ranked very high on the PDI (that is to say, seniority doesn’t automatically incur deference in these population groups) and the more melanated populations (from Asia to the Caribbean to Africa) ranked lowest. It was an educational breakthrough of Hilary proportions.

A word on respect as seen in a black household: respect your elders. Wait to be called upon, allow the most senior to speak, wait your turn, obey the rules. Translate that to a ward round: a consultant is speaking; a senior. I, Ntoetse Caritus Palesa Lerotholi, am not going to interrupt this person. Whether I have better ideas or urgent questions, I’m not doing it. I’ll wait for them to finish talking, for my turn (and if the turn doesn’t seem forthcoming, I’ll very reluctantly raise my hand and you’ll watch the conflict play out on my face). Clinicians asking me to call them by their first names caused me a great deal of stress. I watched in fear and awe as many of classmates interrupted seniors and were, wait for it, rewarded for it. They called it “initiative”. My god. And these same people were subjectively scoring me, penalising my respect for them as a lack thereof. I literally spent the last years of my medical training violating my cultural and social upbringing and inclinations to start being perceived as more “proactive” and you wonder why we say representation matters?

This is not the sad story of how the gate-keepers of power kept me out, I’ve never truly struggled to do well academically and have often operated completely oblivious to what I was “missing”. I’m loved, gifted and have had access to education and opportunities beyond belief. But the lies must stop: We’re not playing on a level field, Black Excellence is very rarely a choice and sometimes the barriers are psychological as well as social. “Twice as good to get half as much” is not a catchphrase. Sitting in the same room does not equality make. With that, I’ll see my late past-paper discovering, musical instrument late-blooming, Sesotho home-language speaking, first generation graduate, incredibly fortunate, Black female self out.

8 thoughts on “Learning: The Selective Rigging of the Meritocracy”